Debt, Corruption and the Soaring Cost of Living 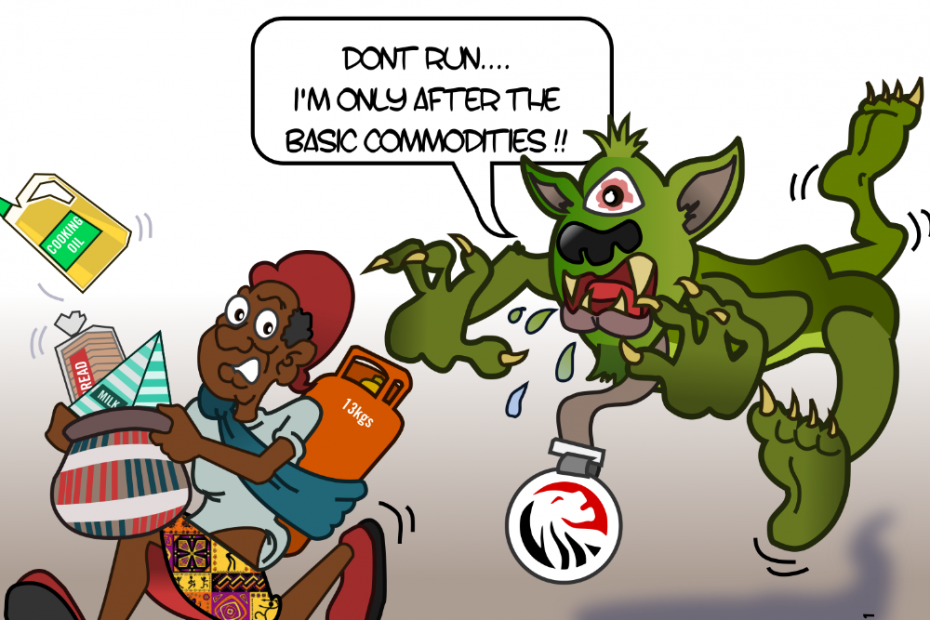 Many Kenyans are today decrying the unimaginable rise in the cost of living. “Tax imepanda juu tulichukuwa loan,” Says one Mwangi who is busy turning roast maize by the roadside. His customers are laborers coming from their daily toil at the nearby industrial area. “Loan kabla ukule, kabla upeleke mtoto shule, kabla ulipe nyumba,” adds Aoko who is selling boiled eggs and smokies next to Mwangi. Both are ordinary Kenyans who wake up daily to fend for their families. Aoko was born in Siaya and had to relocate to the big city to search for ‘greener pastures’ while Mwangi was born right in the city streets and knows the hard life in and out.

“Kenya has a huge debt, and the more loans they take, the more we suffer, and the more we also take loans from multiple mobile loan apps to make ends meet,” says Aoko. “These apps charge an arm and a foot for interest rates,” she adds.

According to the Central Bank of Kenya, in April 2021, domestic debt was Ksh.3.6 trillion while foreign debt stood at Ksh. 3.7 trillion. The total debt stood at Ksh.7.4 Trillion. Fast forward to June 2021, the domestic debt was Ksh. 3.6 while foreign debt was at Ksh. 4 Trillion totalling to 7.7 Trillion. As 2021 comes to a close, there is more borrowing planned, and the sad fact is that it will not be to finance any project, but to ‘restructure’ how the debt portfolio will look like and enhance the management. Additionally, much of the borrowing that has been happening over the last year or so, has been to finance debt repayment. The classic example of borrowing from Peter to pay Paul.

The Kenyan government has been utterly silent on how it conducts public debt management. A lot of the borrowed finances has been poorly utilised and stolen through shady projects, corruption, bribery and overpricing of public works. The fact that there has been little to no public participation every time the government borrows means that the government has been acting outside the dictates of the constitution. The sustainability of the debt situation is questionable, since the country’s leadership seems not to care about social justice, or about the future generations who will ultimately be the ones to pay.

With the economy having been badly affected by the advent of Covid-19 in March 2020, it does not seem to matter to the government whether we are in a pandemic. The austerity measures introduced seem to be affecting only ordinary Kenyans while the politicians continue living in opulence. When the International Monetary Fund announced that the institution will be giving another loan to Kenya worth $2.34 billion, Kenyans went online to petition the International Monetary Fund to cancel the loan.

Kenyans cited mismanagement of funds by the government and the country’s increasing debt load as the reasons they did not want the IMF to give the loan. However, this fell on deaf ears with the IMF failing to consider the voice of Kenyans. Yet, one of the measures that the IMF issued to Kenya, or rather, the Kenyan Government committed to, was to increase taxes. The tax relief that had come with Covid-19 went up in the air. Currently, the Kenyan Government is attempting to tax its way out of the debt problem. Yet, what has essentially led to the high borrowing is corruption and a myriad of loopholes in public finance management.

The fact that we are still borrowing to steal ought to be a cause for worry for many Kenyans. “But what can we do?” asks Aoko. First, Kenyans have their representatives in Parliament, in particular, the National Assembly. All measures in regards to budgeting and borrowing ought to pass through the National Assembly. They essentially pass the levies into law, which are then passed to Kenyans. Borrowing without effective participation of the people means we lose the ability to fix public services including healthcare and education.

As Kenyans continue to suffer, there is a need for us to establish what really happens. Experts argue that debt is not primarily to blame. The problem lies in how the money borrowed is utilised. At first, mega infrastructure projects were used as an excuse for excessive borrowing. Inflated costs of these projects minimized the likelihood of these projects to raise adequate funds to pay off the debts. In 2021, most of the money borrowed is now going to pay debts meaning that Kenya is getting entangled in a borrowing to pay cycle.

Debt is a product of deficit financing. The key question to ask is, do we treat the symptoms or do we treat the disease? Every year since 2000, Kenya has seen a steady increase in budgetary deficit, which necessitates the borrowing. Most of the expensive loans have gone into infrastructure and security. It would be much wiser to borrow to improve our schools and to reduce the cost of healthcare.

To whom much is given, much is required. It is upon Kenyans to rethink who they select into positions of leadership from parliament to the executive. Politicians parading mega infrastructure as an indicator for development is now old school. There is an urgent need for a new crop of politicians who put people like Mwangi and Aoko first.