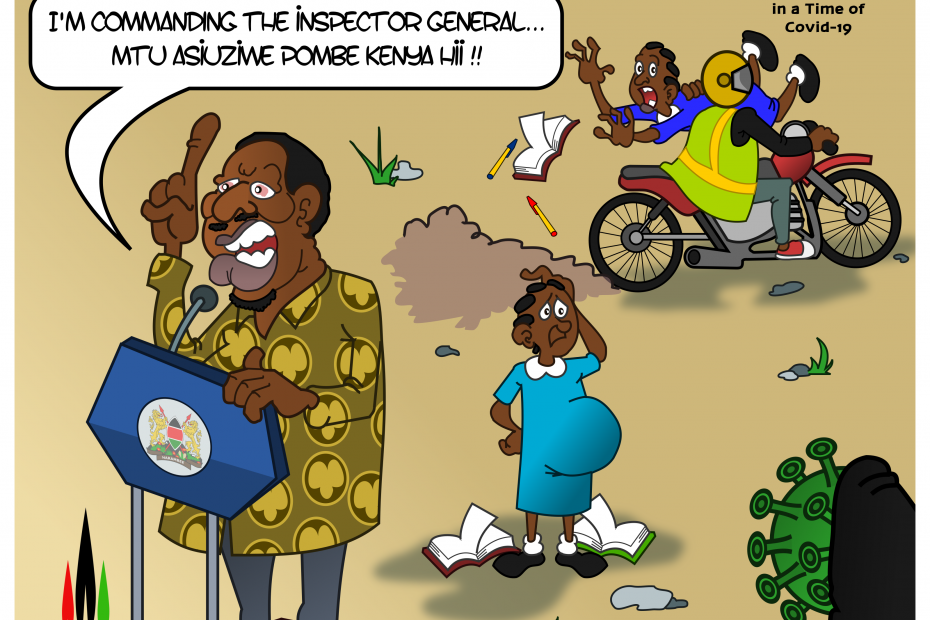 Education in Kenya has had its fair share of controversy in the past years, but nothing has put bare the missing links as Covid-19.

March 15th 2020 — The Kenyan Government orders closure of all schools and colleges nationwide following the discovery of the first case of COVID-19 in Kenya. This disrupts learning for 17 million learners across the country.
For the ten months that learners remained at home, a lot happened.

Evictions: Landlords and Government
The social and economic impact on school going children was heavy, and Kenya is yet to fully come to terms with it. When schools closed, on the side of the child, loss of learning was one of many other impacts. Children who were worthwhile used to playing together ended up locked up in houses. Children also suffered great loss as a result of lost earnings for the parents during the ensuing lockdown.

Sadly, numerous numbers of children were rendered homeless, after landlords descended on families over non payment of rent. Not only were evictions experienced, but also, there are cases such as that of a landlord in Kawangware who killed one of his tenants for defaulting on a Ksh 2,500 rent, and residents responded by setting his houses on fire. Still in Kawangware, a landlord decided to remove the roof and door of a house after a woman failed to pay the rent for the month of April 2020. These are just two cases of numerous others across the country.

Despite the law protecting tenants from such wanton evictions and ruthlessness actions, these have continued unabated. Additionally, in the middle of the pandemic, government officials too were keen on enforcing evictions on supposed government-owned lands. There were cases of forced eviction in Kariobangi in Nairobi, Ruai in Nairobi, Jomo Kenyatta Public Mombasa and Kibos in Kisumu County. Collectively, over 8,000 people, potentially a conservative number, have been evicted during the pandemic, raising global condemnation. This has had an effect on school going children.

Teenage pregnancies
With school closed, the economy shrinking, and the pandemic ensuing, a new crisis was brewing owing to school closures. Over a period of three months in lockdown due to COVID-19, 152,000 Kenyan teenage girls became pregnant — a 40% increase in the country’s monthly average. These numbers, from early July, are some of the earliest pieces of evidence linking the COVID-19 pandemic to unintended pregnancies.

Comprehensive national data on the impact of COVID-19 on teen pregnancy rates are not yet available, despite the government initially disputing the sharp rise in teenage pregnancies. The country was left with, at least anecdotally, though, some healthcare providers a coronavirus effect.

So, what caused this?
At some point, government officials blamed Kenyans for the lack of morals for their children. At some point, the Cabinet Secretary for Interior, Fred Matian’gi ordered the arrest of all men suspected of impregnating school children. In as much, the parents may be to blame for the rising pregnancies, since, over the 10-month period when schools were closed, a lot of school going children roamed neighbourhoods and villages all day. Indeed this became a crisis, to the point of government agencies in Homa-Bay and Vihiga threatening to arrest parents of children loitering.
In the real sense, the failure of the government to come up with a sound policy on how it would deal with education amid cessation of in-person learning, was a huge contribution to the increased cases of teenage pregnancies and school dropouts. This means that there was nothing to buttress children from growing social pressures.

Inequality and Online Schooling
In 2013, the Kenya government announced the launch of the One Laptop Per Child project. Moving goal posts made sure that the project was eventually dropped in 2019. In 2014, controversy ensued after some of the tendering companies in the Ksh.2B project accused the Ministry of Education of giving top listing to an Indian company, Olive Telecommunications, to supply the laptops to Kenya even after it not meeting the basic tendering requirements.

The project would have been in its seventh year of implementation in 2021. The failure of the project, such a massive preconceived failure, meant that when Covid-19 pandemic struck, education in Kenya had no digital alternatives worth mentioning.

The entire public school system was struck the most since there was not an iota of national policy detailing how online schooling should be conducted. Moreover, with the collapse of the One Laptop Per Child project, hardly do public schools have equipment both hardware and software to facilitate digital learning.

Some private schools devised methods to keep learning ongoing through online software such as Zoom. This was however intended at keeping teachers busy, as well as source an extra buck from the willing parents whose children attend private school. In this scheme of events, there was no way to keep track of progress between the teacher and the learners, not to mention the upsurge of hijacking of online classes by malicious individuals all over the internet. It is also worth mentioning that more than 100 private schools were closed in between March 2020 and January 2021. This had an effect on at least 39,000 learners, which in effect meant, overcrowded schools.

For the much wealthier private schools, however, education seemed to seamlessly happen digitally owing to readily accessible software and gadgets. For the lover level private schools though, parents suffered additional burdens when it comes to access of devices and internet access for their children.

As it is Now
In March 2021, the Kenyan Government issued a new round of lockdown measures, locking down five counties, namely; Nairobi, Kajiado, Nakuru, Kiambu and Machakos. In-person learning sessions remained suspended in schools and institutions across the country. As it happened in 2020, no further guidelines have been issued on how the government intends to deal with education in the third wave of Covid-19.

Moving forward it is important that Kenyans pay a keen eye in the governance of their country, particularly on issues that touch on them directly such as education. The lack of clear leadership within the education sector in terms of clarity on curriculum reforms and rollout ought to have not escaped the eyes of well-meaning Kenyans, in particular parents.