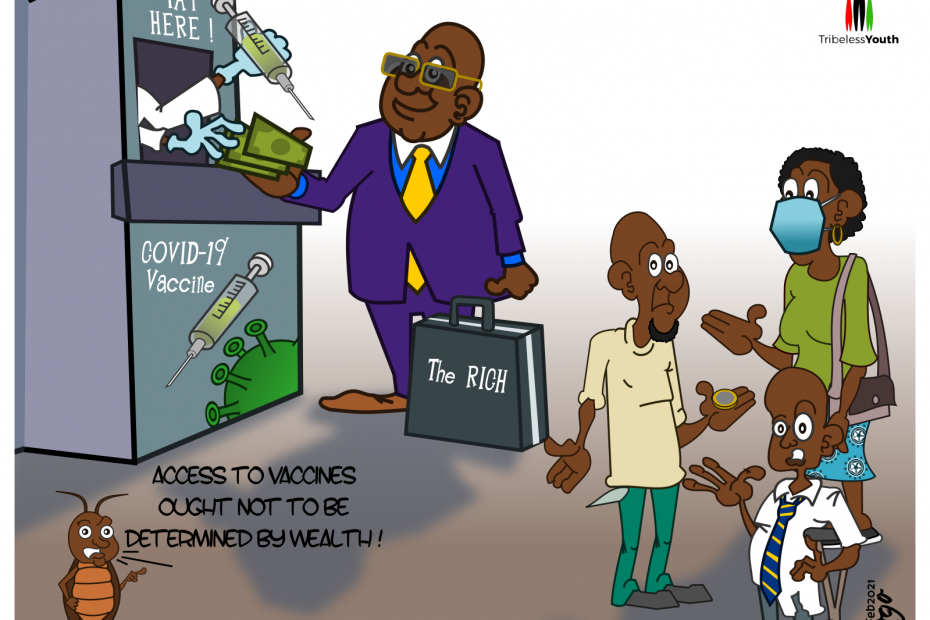 The elusive COVID 19 vaccine for majority of Kenyans

The COVID 19 pandemic continues to ravage the world brutally as a new strain christened, ‘Delta’ is detected in over 24 countries in the world including 12 countries in Africa.  Kenya too has not been spared the devastating effects of the new strain and a third wave.  To date, close to 194,000 cases have been diagnosed in the country with over 3,800 deaths across the country.  According to the ministry of health, “the country is experiencing a rise in COVID 19 daily infections occasioned by the third wave.”  This comes at a time when 13 counties are undergoing partial lockdown and strict restrictions of movement in form of a dusk to dawn curfew.  The countries healthcare system is sagging and nearing breaking point under the weight of COCID 19 active cases.

In March 2021 the country rolled out the first round of vaccinations to mitigate the severe effects of the Corona Virus.  However this first dose of the Oxford AstraZeneca vaccine managed to reach only about 921, 000 members of the population as at May 2021.  With an estimated population of over 48 million people, this is a drop in the ocean considering that this rollout only targeted frontline health workers, essential service providers, the elderly and people with disabilities and underlying conditions.  This first dose left out the youth, children and young adult population which, according to population census form the majority of Kenyans.  Incidentally, the political elite and the ruling class could be seen in media reports receiving the vaccine some from the comfort of their homes.  At one point, in what appeared to have been a national government function, the vaccines were administered at State House in full glare of cameras.    Majority, if not all, members of the executive, national assembly and the senate were vaccinated on that particular rollout.  There were speculations that, one particular influential politician managed to import his own doses of the SPUTNIK V vaccine from Russia.

During this mass vaccination rollout, media reports indicated that some doses of the vaccine had been acquired from south Sudan nearing the end of their shelf life.  South Sudan itself is struggling to acquire the vaccine and has abandoned the program altogether.  The Kenyan Ministry for Health, Dr. Mutahi Kagwe, himself admitted to possibilities of some ordinary Kenyans having been vaccinated with water from counterfeit vials.  Some European Union countries have declined to admit Kenyan passport holders, who have received even the two doses of the AstraZeneca vaccine, into their countries.

In May 2021 the government rolled out the second phase of the mass vaccination campaign after having received donations from European nations.  However this second dose was only available to Kenyans who had received the initial dose once again leaving out a majority of Kenyan citizens.  To date only about 1.6 million Kenyans have been vaccinated.   Majority of the population lack information on the availability, centers of vaccination, effectiveness and access to the vaccine.

Amidst the confusion, the Government announced that it has acquired a grant to purchase 30 million doses of the Johnson and Johnson vaccine.  The ministry of health expects to receive at least 10 million doses in august 2021.  How the vaccines will be administered considering that the first mass immunization campaign has not been completed, remains to be the question.

To the majority of Kenyan children and young adults the idea of acquiring the COVID 19 vaccine remains to be a pipe dream as the pandemic continues to ravage Africa.